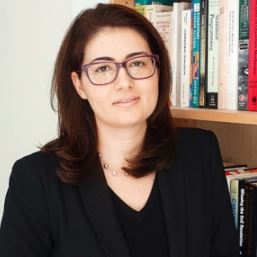 Aida Todri-Sanial received the B.S. degree in electrical engineering from Bradley University, IL in 2001, M.S. degree in electrical engineering from Long Beach State University, CA, in 2003 and a Ph.D. degree in electrical and computer engineering from the University of California, Santa Barbara, in 2009. She is currently a Director of Research for the French National Council of Scientific Research (CNRS) attached to Laboratoire d’Informatique de Robotique et de Microélectronique de Montpellier (LIRMM). Dr. Todri-Sanial was a visiting fellow at the Cambridge Graphene Center and Wolfson College at the University of Cambridge, UK during 2016-2017. Previously, she was an R&D Engineer for Fermi National Accelerator Laboratory, IL. She has also held visiting research positions at Mentor Graphics, Cadence Design Systems, STMicroelectronics and IBM TJ Watson Research Center. Her research interests focus on emerging technologies and novel computing paradigms such as neuromorphic and quantum computing. Web:https://www.lirmm.fr/aida-todri-sanial/